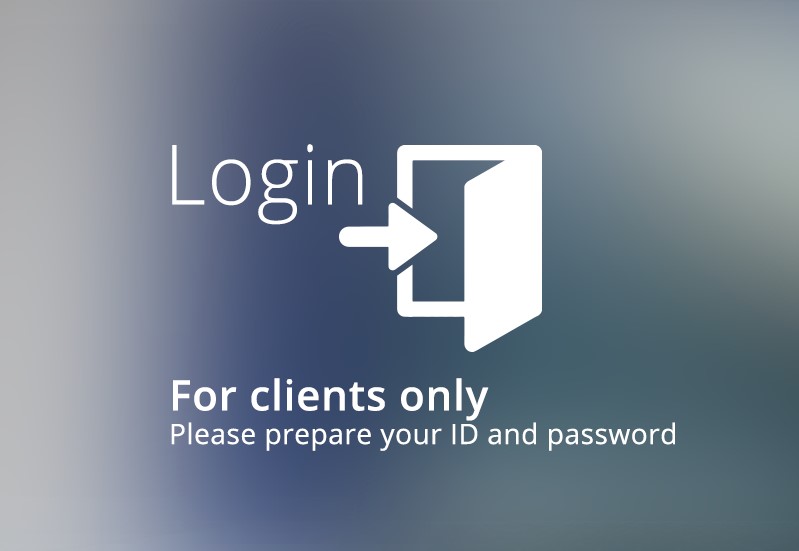 Iron Ore Flows Back On Track 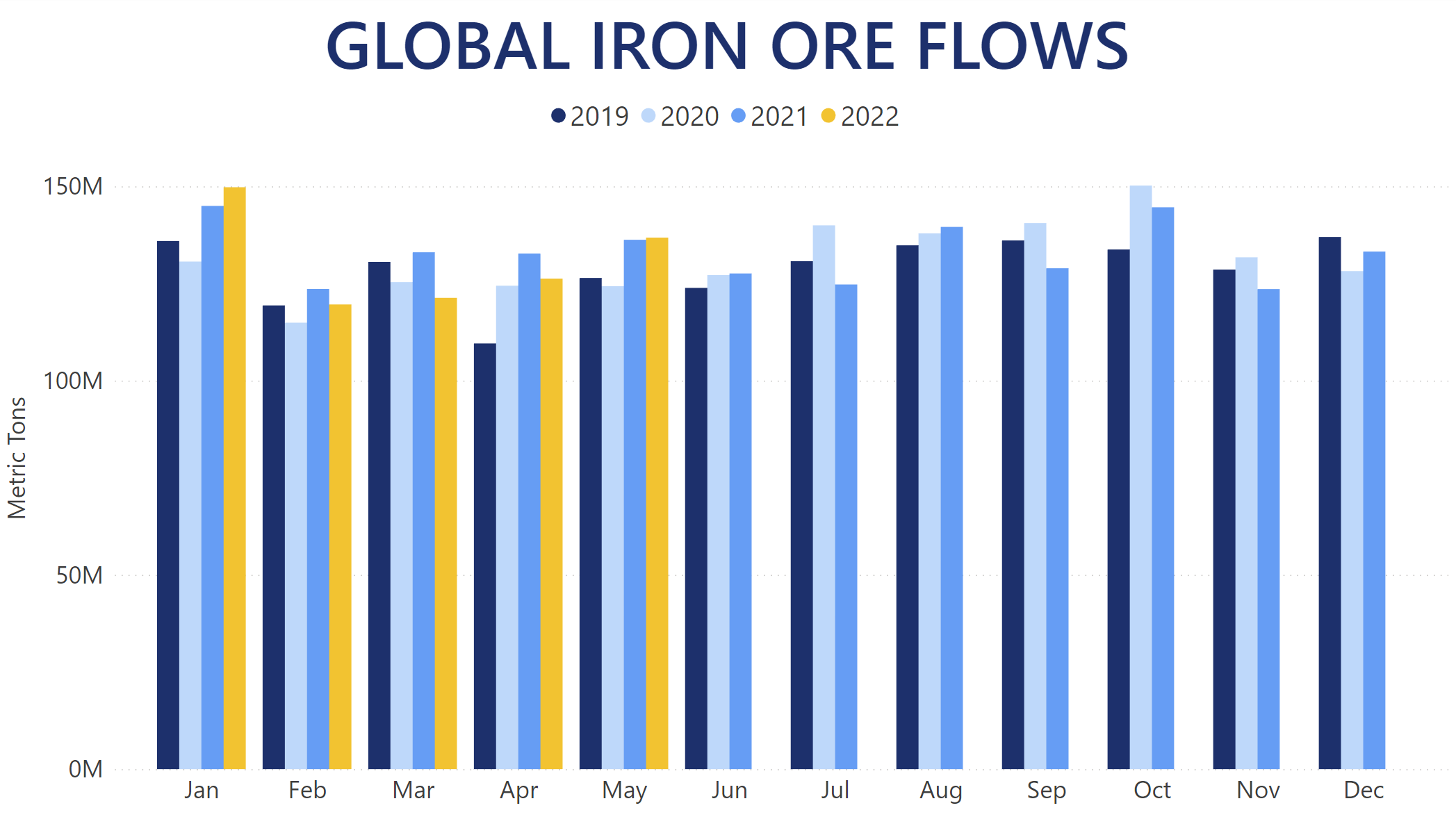 Trade Flows data shows that after three consecutive months of year-on-year regression, global Iron Ore flows are back on the rise in May 2022. Following the record-breaking January with its 150m MT transported, shipments took the somewhat anticipated dive to under 120m MT carried in February due to the usual effect of Chinese New Year translating into a 20% month-on-month decrease. However, the usually quick bounce-back did not materialize this March with Iron Ore flows barely breaking the 120m MT mark, which meant an 8.8% year-on-year decrease. The market further remained suppressed into April with just over 125m MT of Iron Ore were carried by Dry Bulkers, registering a 4.9% year-on-year decrease. In May, however, this trend was finally overturned when over 136m MT of cargo were discharged worldwide. While a marginal 0.4% year-on-year improvement, this placed the past month as the strongest May for Iron Ore on record, registering an 8.4% month-on-month increase in the process. 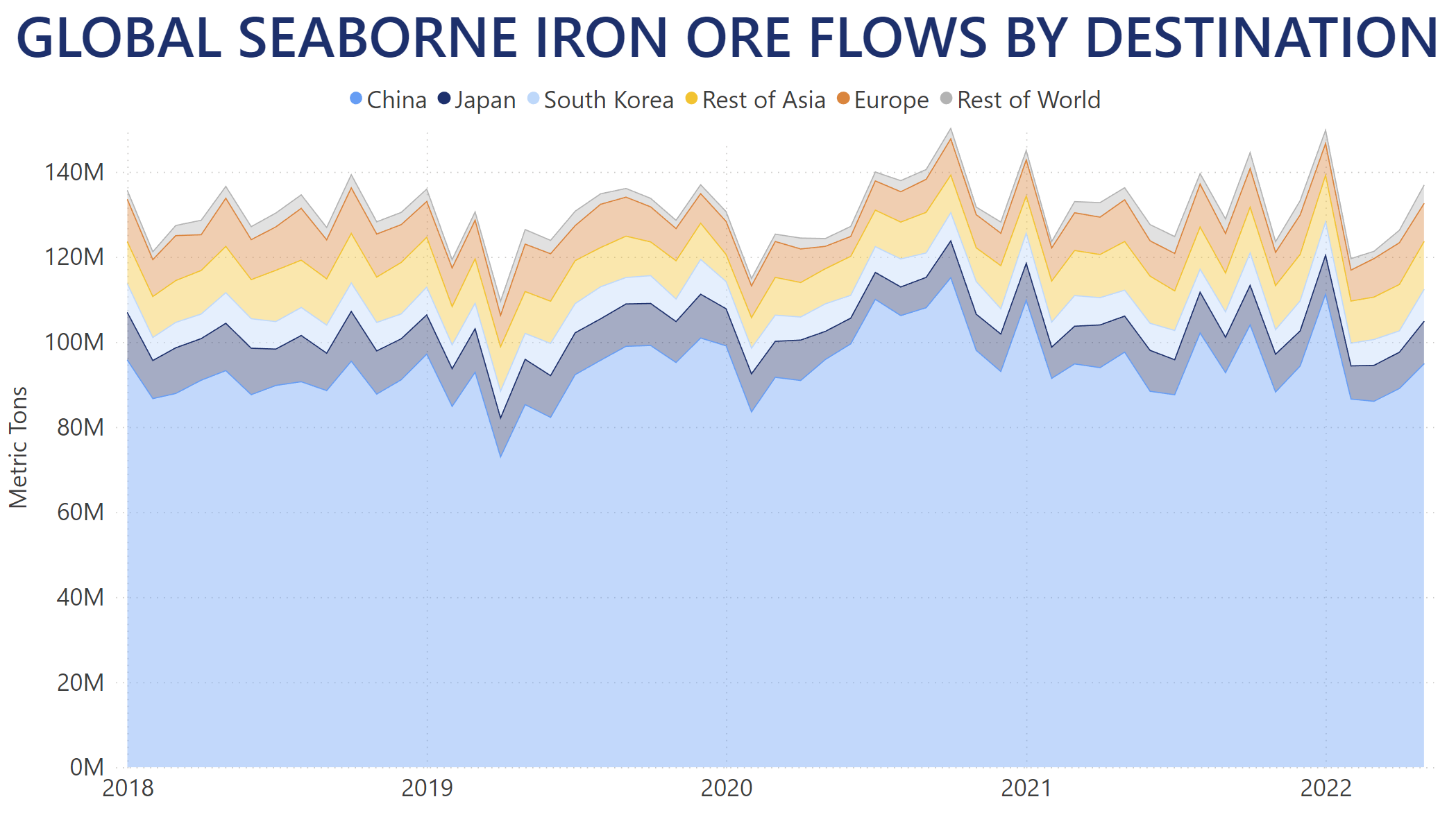 Almost 94m MT of Iron Ore were discharged at Chinese ports in May, which represented a 5.2% increase over April volumes. Nevertheless, this still meant that the largest importer of the commodity registered a 4% year-on-year regression. It also gave China a market share of less than 70%, which has only happened twice over the past 36 months. This downturn was compensated for by smaller importers, such as Japan and South Korea, which discharged just under 10m MT and 7.5m MT, respectively. This represented a 17.4% and 23% year-on-year gain for each country, giving them market shares of over 7.3% and 5.5% in May. European importers eased off Iron Ore flows, and after discharging nearly 10m MT of Iron Ore in April, imported less than 8.8m MT in May. This represents a 10.8% year-on-year decrease for Iron Ore flows to the Old Continent. 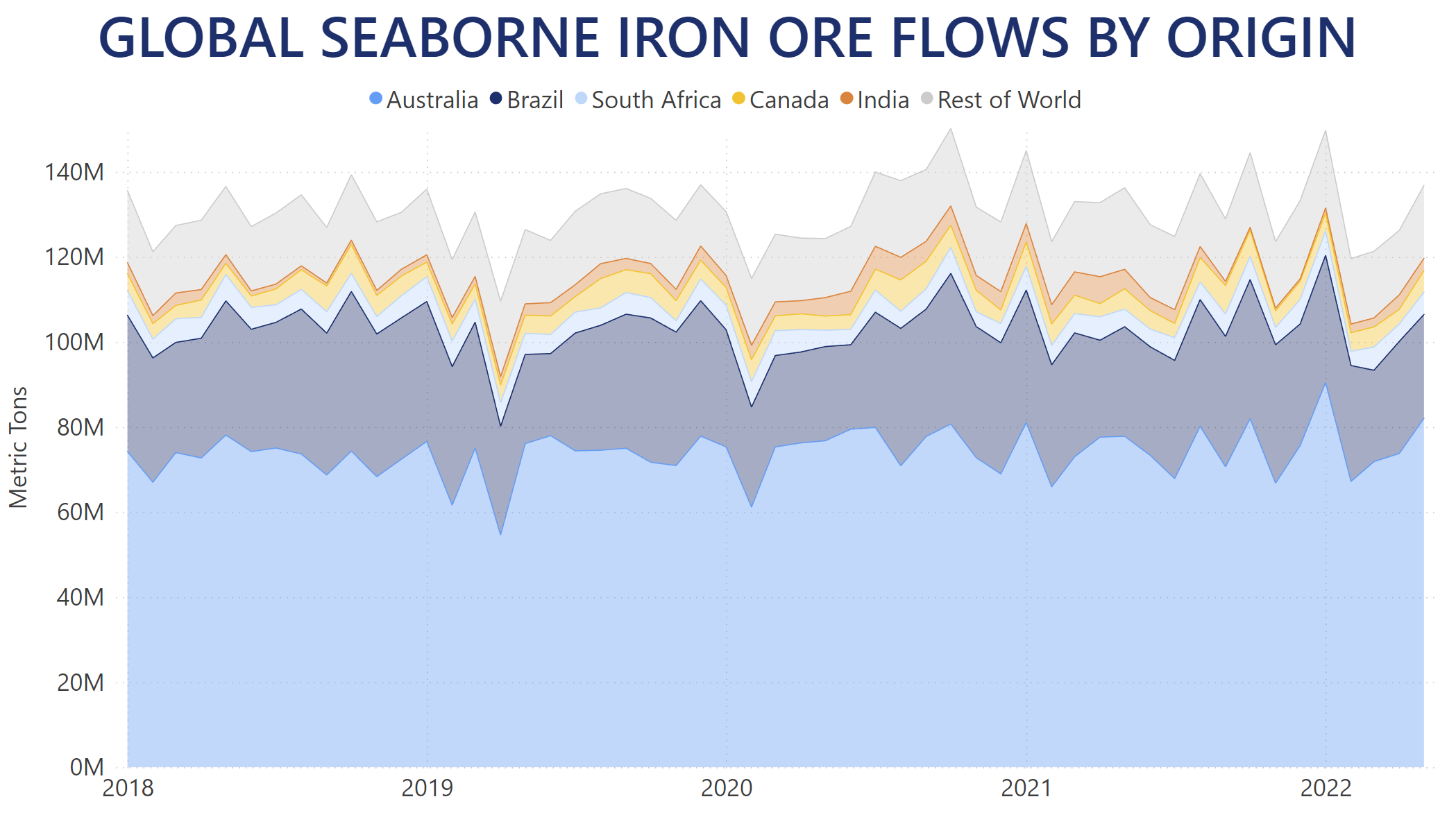 Supply-wise, almost 81m MT of the global Iron Ore in May were shipped out of Australia, making it the fourth most prolific month over the past five years for the world's largest provider. This represented a 9.6% month-on-month and 4% year-on-year boost for Australian Iron Ore flows. Shipments out of Brazil fell from over 26.3m MT in April to under 24.3m MT in May, registering a 6% year-on-year drop. Iron Ore flows out of South Africa exceeded 5.2m MT in May, translating into a 26.5% year-on-year boost. Discharged quantities originating from Canada were just over 5m MT last month, which meant a 46.1% month-on-month increase, as well as a 5.7 year-on-year gain. The combined remainder of global Iron Ore exporters shipped over 17.2m MT of commodity in May. While this was 14% higher than April levels, it still represented a 10% year-on-year drop. 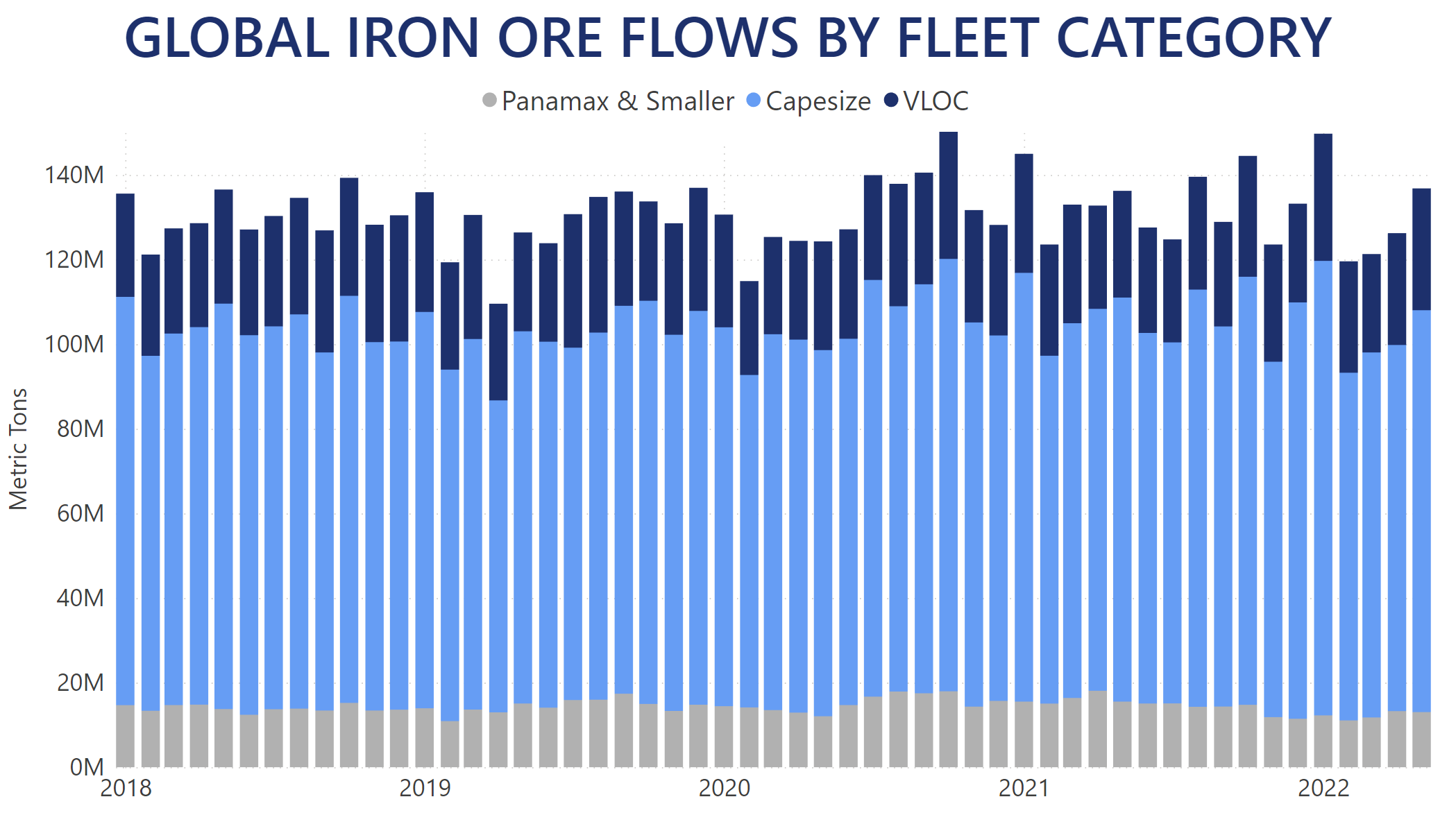 As usual, most of the world's Iron Ore in May was transported by Capesize vessels between 100K and 220K of deadweight. The Cape fleet carried almost 94m MT last month, registering a third consecutive month-on-month boost post-February 2022. While below the absolute maximum of 107.4m MT shipped aboard Capes in January, May's quantities are still above the average monthly level of the past 36 months. Meanwhile, VLOCs over 220K of deadweight also carried at the top of their range, with 28.8m MT transported in May, which represented both an 8.9% month-on-month increase, as well as a 14.1% year-on-year gain. At the opposite end of the fleet, in May vessels under 100K deadweight saw another month with less than 10% market share. This has now become the norm over the past 7 months, whereas during the previous four years, only three such instances were recorded.

You can use our Trade Flows tool to follow how the market develops further, as well as gain accurate intelligence on a macro- and micro-level on this and other topics relevant to your business. 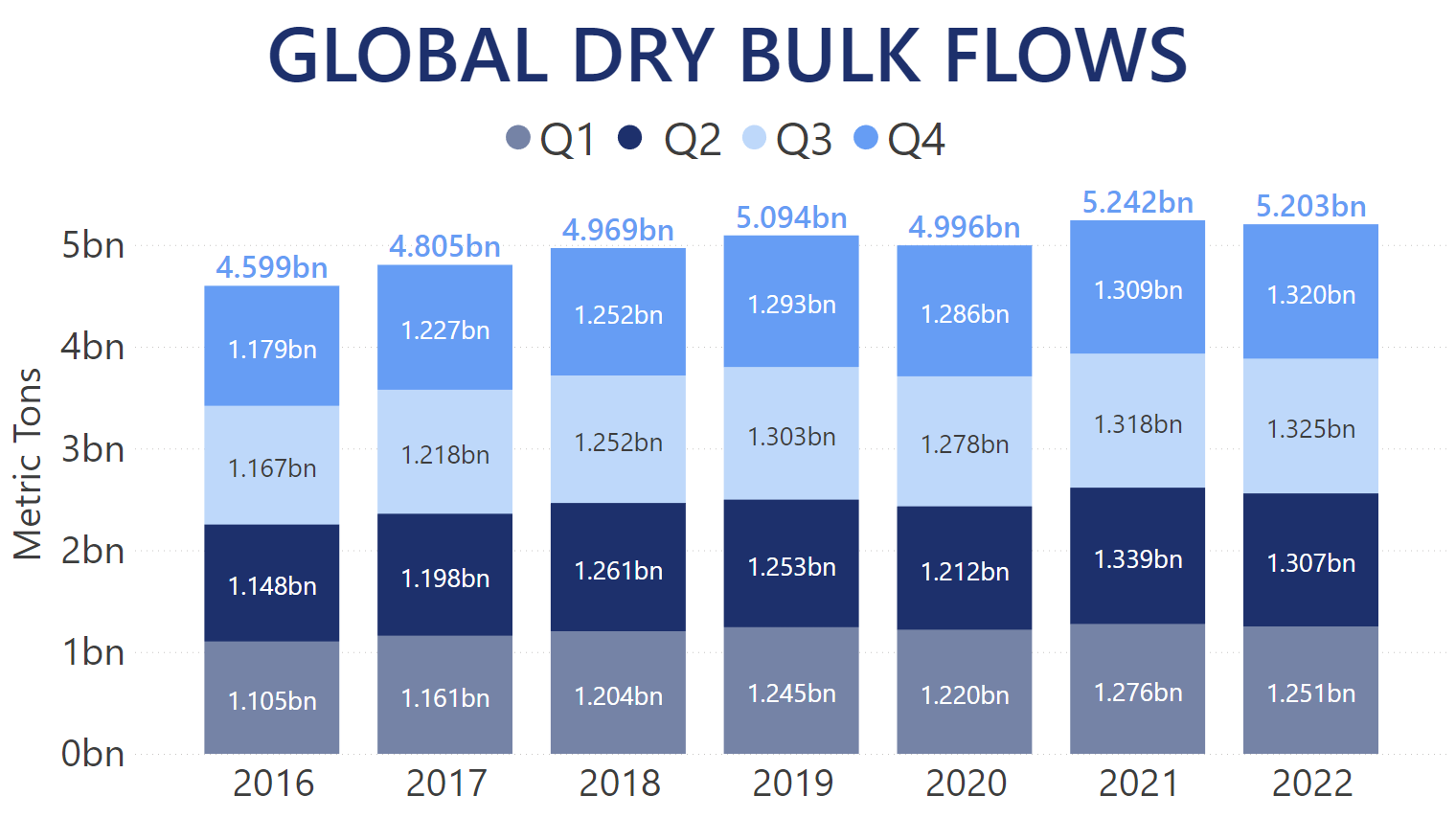 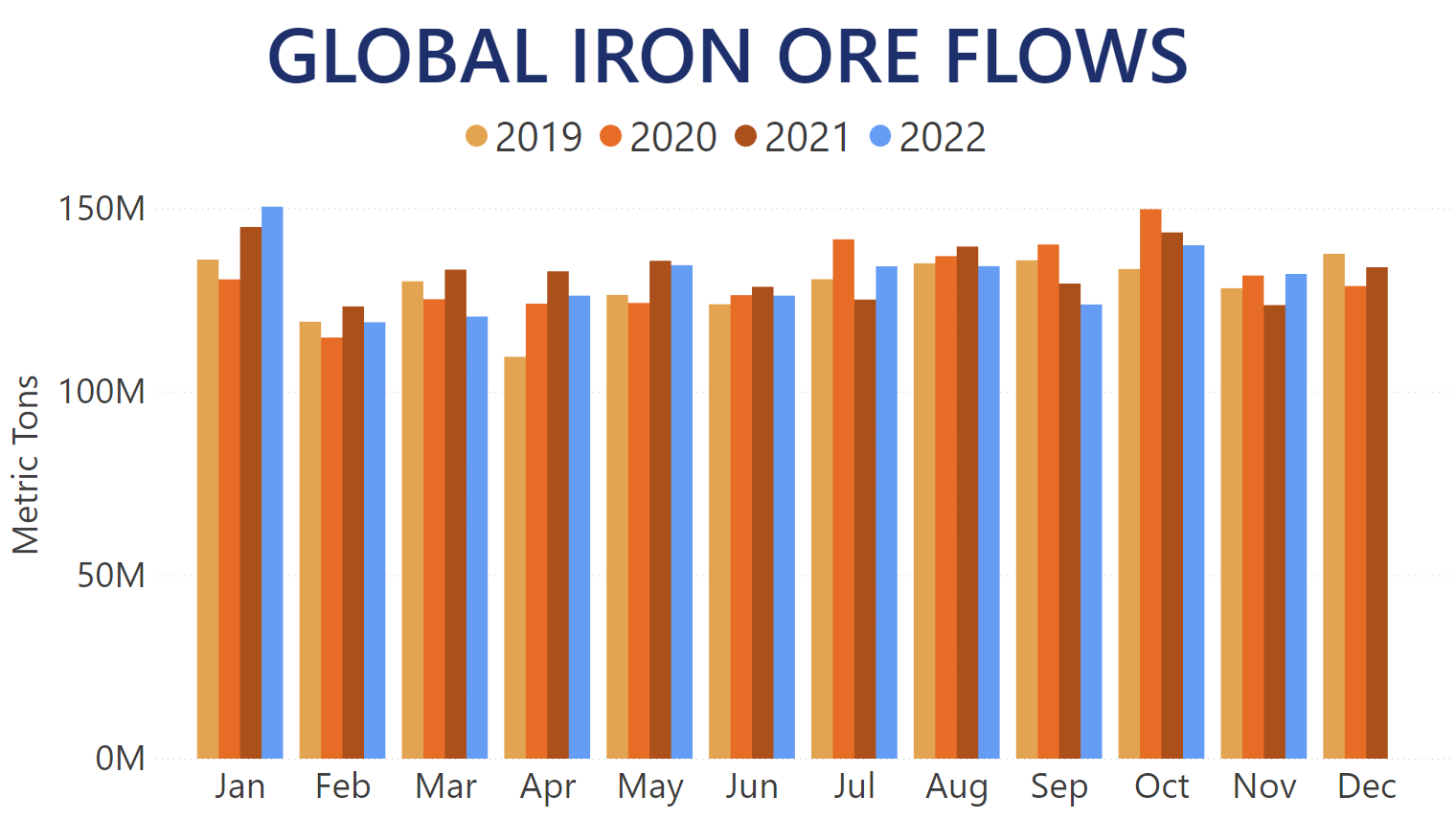 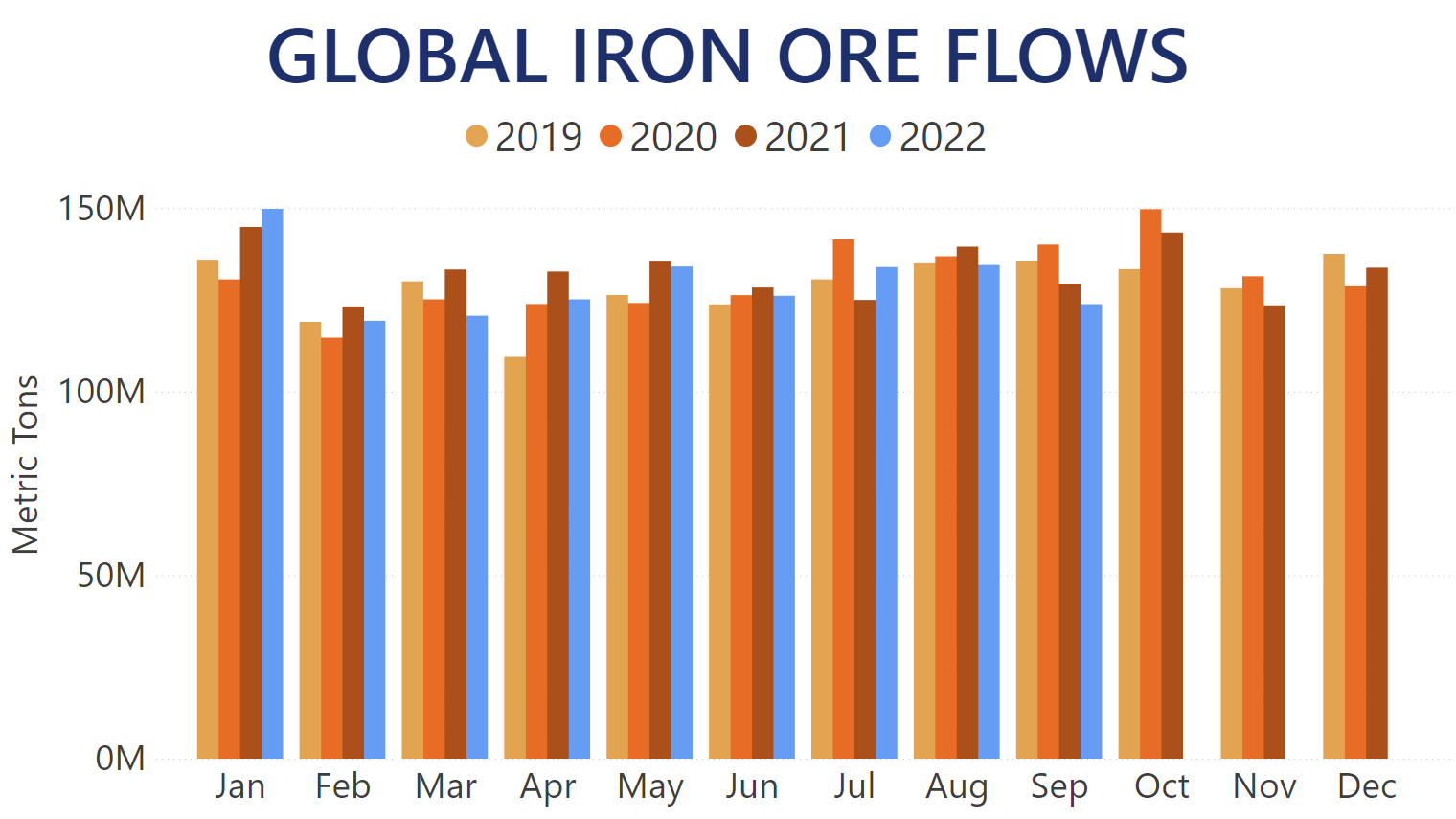